• One 6mm red round button

with the indicated yarn

While working on the last stitch of the round, just

before you make the color change, make a single

crochet stitch as usual by inserting hook in the stitch

and pull up a loop. Now instead of pulling the same

yarn through the two remaining loops on your hook,

complete the stitch by pulling the new color through

the loops. In the first stitch of the next round, instead

of making a single crochet stitch, slip stitch with the

of the remaining stitches of the round. Work on the

next round as usual.

From here on, we go back to working in the round.

the front of the shoe, sc 4 along the other row end

Sew the gap at the heel closed.

Stuff as you go.

Starting from the last stitch worked, count counterclockwise and mark the 5th stitch.

Make the second leg and stuff but do not fasten

off. We will continue working on this leg and join it

with the other leg in the next round.

Rnd 1: ch 4; starting from the marked st of the first

Stuff the body. While stuffing, bend the legs

forward at the point where the legs and the body

meet so no stuffing passes through the top portion

of the legs [Pic 12]. This is to ensure that the upper

legs remain floppy, which will make it possible for

the doll to sit.

Stuff the neck firmly. It is very important to stuff

support the weight of the head.

Fasten off, leaving a long tail for sewing. Using your

yarn needle, weave the yarn tail through the front

loop of each remaining stitch and pull it tight, closing

off the neck. Weave in the yarn end.

Row 1: Starting from the 4th ch from the hook, dc in

Fasten off, leaving a long tail for sewing. Wrap the

together. Secure to the leg with a few tacks.

Fasten off, leaving a long tail for sewing. Do not stuff

Press the top of the arm flat and sew it closed. Pin

arms on Rnd 15 of the body and sew them in place.

Ch 28 with light green yarn. sl st in the first ch to make

a ring. [Note: Leave a long tail at the beginning of the

chain to use for sewing the skirt onto the body later.]

Work in continuous spirals from the next round

Fasten off. Weave in the yarn ends.

around Rnd 6. Hold it in place with pearl headed pins

and sew in place.

Stuff head, leaving some space in the center for the

neck that will be inserted later.

Fasten off. Weave in the yarn end.

yarn. Insert needle from the opening at the base of

the head, bring it out from Point A next to the eye [Pic

13]. Push the needle back in from Point B and out from

Gently squish the eyes together with your fingers and

carefully pull the yarn to bring the eyes closer. While

holding this shape, push the needle back in from Point

D, and bring it out from the opening at the base of

the head [Pic 17]. Gently pull both the yarn ends and

tie them together to hold the shape [Pic 18]. Clip off

excess yarn and push the yarn ends inside the head.

crescent shape around the outer edge of the eyes [Pic

Fasten off leaving a very long tail. We will use this

tail to embroider bangs on the forehead.

Slip the wig on the

head; make sure the

above the left eye.

pins, mark the area on

the bangs will be

yarn tail around these

pins to create a zigzag

outline for the bangs

that will cover the

entire right side of the forehead [Pic 25]. Now we

will start embroidering hair, one cluster at a time.

With your yarn needle, make a stitch on the

hairpiece at the end of the zigzag outline [Pic 26].

Do not take out the pins yet; we will need them

to hold the outline. Next, make another stitch

on the pointed end of the outline; make sure the

needle goes beneath the yarn that serves as your

outline and through one stitch on the head [Pic

27]. Make another stitch at exactly the same spot,

using the same technique, to hold the pointed

end of the outline in place. Sew your next stitch

on the hairpiece [Pic 28]. Continue embroidering

slanted lines, starting at the pointed end of the

zigzag and ending at the edge of the hairpiece until

Continue until you cover the entire right side of the

with pearl headed pins on the left side of the

the wig with a few tacks at the back of the head.

them in half. Take another strand of brown yarn,

equal in length to the other stands, wrap it around

the fold line and use it to tie the other strands

together [Pic 35]. Divide the strands into three

the end and clip off excess yarn. Thread a yarn

needle with brown yarn and sew the braids on the

that the head of your amigurumi is movable.

Thread a yarn needle with brown yarn and insert

the needle from the top of the head and out

from the neck opening. Now insert your needle

through the base of the neck [between Rnd 18 &

19 of the body], back through the neck opening

on the head, bringing it out again from the top of

the head. Slide the head down the two strands of

yarn until it sits perfectly on the neck. Knot the

yarn ends together a few times to secure. Clip off

back into the head. See Pic 39 for reference.

Row 1: Starting from the 6th ch from the hook, sc

Fasten off. Weave in the yarn ends.

Sew a 6mm red button on Row 1 of the capelet

[see Pic 40 for placement]. Wrap it around the

shoulders and slip the button through the 5-ch

Row 1: Ch 4. Starting from the second ch from the

Now we will work along the row end to even out

Next, we will join the band and work in continuous

Stuff only the ‘pom pom’, not the stem of the hat.

Fasten off, leaving a long tail for sewing. Using

your yarn needle, weave the yarn tail through the

front loop of each remaining stitch and pull it tight,

closing off the gap. Weave in the yarn ends.

Sew together Row 1 and Row 47 of the ribbed

band and weave in the yarn end. Place the hat

Your Trixie Jollybum is now ready.

View all posts by Admin → 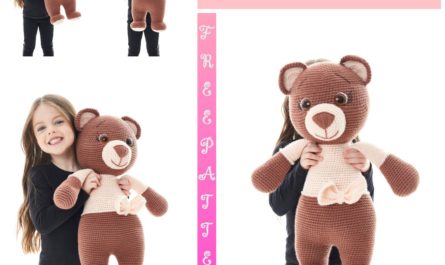